The AutoCAD Window – A Quick Overview

Looking for Drawing Symbols? Create your own using AutoCAD Blocks

Do you Know AUTOCAD Xrefs?

Are you looking for a PDF to CAD Converter? Look at this!

AUTOCAD’s Offset command is another of the editing tools that comprise this program and with which it is possible to create parallel lines as we will learn in this Tutorial.

You only need to select the source object, from which, with a specified distance, you can generate as many parallel objects as you want.

The Offset command creates parallel copies from source objects like lines or curves. For example, we could create concentric (parallel) circles in a single step with this AUTOCAD command.

We must finally indicate the direction in which the offset will be performed with respect to the source.

The following figure shows the parameters involved in the execution of the AUTOCAD Offset command: 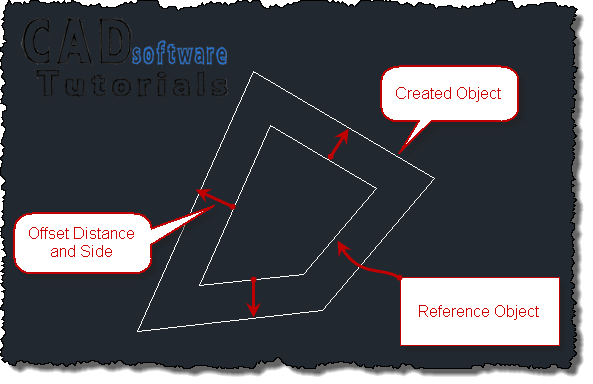 Thus, AUTOCAD’s Offset Command is executed in the following manner:

1 Select the Offset command from the Home tab→Modify panel:

Also, if you are a command line lover, you can type the command “offset” in it and press Enter to start the AUTOCAD Offset command.

2 From the Command Window (or from dynamic input if active) this message will be shown: Specify offset distance or [Through/ Erase / Layer]:

We will have several options for responding to AUTOCAD’S Offset command:

Writing the Offset Length from the reference object

Write directly from the keyboard the numerical value and press Enter or select from drawing two endpoints of an imaginary line whose length is the required offset distance.

To use the latter option it is recommended to have object Snap mode active in order to make a more precise selection of the above mentioned endpoints.

After introducing the offset distance this message will be displayed: Select object to offset or [Exit / Undo]: answer by selecting from the drawing, with mouse and cursor, the source object to be copied.

When selecting the object, the message: Specify point on side to offset or [Exit / Multiple / Undo]: will be shown, requesting us to select a point from the drawing indicating the side on which the copied object shall be created.

For example, in this tutorial’s first figure, this point would be anyone outside the area bounded by the reference object.

Selecting a point through which generated object will pass

In this case, activate the option writing the letter “T” (command line) and press Enter.

Select the object to be copied when the message Select object to offset or [Exit / Undo]: shows on commands window.

Then, when the message: Specify through point or [Exit / Multiple / Undo]: appears, select a point in the drawing area where the generated object should pass through.

This option is useful when you know where to pass the created copy but do not know the length of offset distance.

3 Repeat what was explained previously to use the offset command again if you want to keep creating parallel copies.

To finish the AUTOCAD Offset command press the Esc key on the keyboard.

Cancel reply
{"email":"Email address invalid","url":"Website address invalid","required":"Required field missing"}
We use cookies on our website to give you the most relevant experience by remembering your preferences and repeat visits. By clicking “Accept All”, you consent to the use of ALL the cookies. However, you may visit "Cookie Settings" to provide a controlled consent.
Cookie SettingsAccept All
Manage consent

This website uses cookies to improve your experience while you navigate through the website. Out of these, the cookies that are categorized as necessary are stored on your browser as they are essential for the working of basic functionalities of the website. We also use third-party cookies that help us analyze and understand how you use this website. These cookies will be stored in your browser only with your consent. You also have the option to opt-out of these cookies. But opting out of some of these cookies may affect your browsing experience.
Necessary Always Enabled
Necessary cookies are absolutely essential for the website to function properly. These cookies ensure basic functionalities and security features of the website, anonymously.
Functional
Functional cookies help to perform certain functionalities like sharing the content of the website on social media platforms, collect feedbacks, and other third-party features.
Performance
Performance cookies are used to understand and analyze the key performance indexes of the website which helps in delivering a better user experience for the visitors.
Analytics
Analytical cookies are used to understand how visitors interact with the website. These cookies help provide information on metrics the number of visitors, bounce rate, traffic source, etc.
Advertisement
Advertisement cookies are used to provide visitors with relevant ads and marketing campaigns. These cookies track visitors across websites and collect information to provide customized ads.
Others
Other uncategorized cookies are those that are being analyzed and have not been classified into a category as yet.
SAVE & ACCEPT